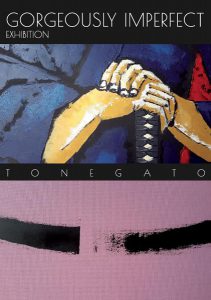 Friday October 12th at 5:30 pm, in Villa Raimondi-Carpegna on Via Raimondi 20 in Birago di Lentate sul Seveso, there will be the opening of the exhibition “Gorgeously imperfect”, by Marco Tonegato. The name of the event should not lead to a praise of imperfection. The pictorial research wants to capture the evocative state of “unfinished” that characterizes the human condition, in its path to achieve perfection.

A project work, a painting are never “finished”, there is always space for improvement. This incompleteness is rendered in a violent way, as a reification of one of the essential themes of human life: imperfection.

The exhibition is organized in two sections, a figurative and an abstract one. In the former, we find themes such as nature, Samurai, Geisha and Budo. The second section develops the principles of Japanese aesthetics of the cognitive experience of the concept of MA. These artworks are characterized by a tension between fullness and emptiness, in a search for balance between action and suspension, typical of a Zen matrix.

In his oil on canvas (30 pieces are included in this exhibition), Tonegato uses the spatula technique, leaving different thicknesses of the color on the support, depending on the desired final effect.

Marco Tonegato was born in Milan in 1966. When he was only 6, he began painting the first watercolors observing the work of Franco Genovese, a painter from Schio (VI), his mother’s cousin. Following his passion for design he enrolled in Architecture at the Polytechnic of Milan where he graduated with full marks.

In Switzerland he obtained a Master at the IAUG Institut d’Architecture de l’Université de Genève. From 1999 to 2005, he teaches at the IAUG in Geneva. Thanks to Prof. Henri Bresler from Paris, Tonegato rediscovers his passion for painting. During his career he has worked as an architect in Denmark, Sweden and at Monza (Italy) for the development of several important construction projects.

In 2014 he started a painting workshop with disabled children from the OASI social cooperative in Lentate sul Seveso (MB), a point of reference for the world of disability since 1989 (for info www.oasibirago.org). In this particular workshop more than 130 paintings and a dozen exhibitions were created.

His interest in Japanese aesthetics derives from various martial arts: Tonegato took Karate at a young age and from 2007 he has practiced Iaido (4° Dan) and Kendo (2° Dan).

Some of his paintings have been published in the book “LILA Stories of Kendo”, published by 30 Holding in 2018.